Southern California Sports writer Jim Alexander recently wrote in his column in the Press Enterprise Newspaper, “when the Riverside Sport Hall of Fame inducts its Class of 2020 May 18 at the Convention Center, it is guaranteed that there will be at least one speech, and probably more, in which the theme will be: ‘Somebody else deserves it more than me.'” 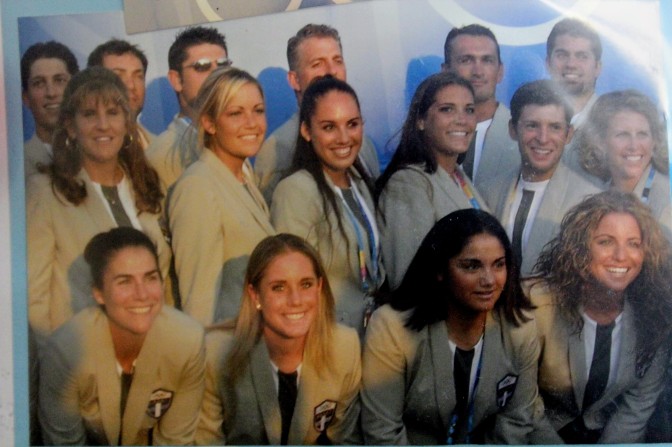 He continued, “the names for this years inductees were revealed several weeks ago, and when the Hall welcomes its new members – Nos. 106 to 111 – in May, there should be little argument over whether any of them belong.”  One of those names is a familiar face and well loved member of the THS staff — Mrs. Duhon.

Mr. Alexander shared this about Mrs. Duhon, “Vanessa Czarnecki-Duhon is an Olympian, and she participated at the birthplace of the Olympics, as the starting second baseman on the Greek softball team at the 2004 Athens games. (There may not have been outsized expectations, but I can’t help but think wearing a Greek uniform in Athens didn’t come with some measure of pressure.)

Before that, she was an all-CIF and all-state high school softball player at Riverside Poly, while also lettering in basketball and track. She was a four-year starter for Fresno State and appeared in the 1999 Women’s College World Series as a freshman, and she had a significant international career beyond those ’04 Olympics, playing for the gold medal-winning U.S. junior team in 1999, and also participating for Greece at the 2006 World Cup in Beijing. Later, she taught and coached softball at Poly, with a 101-43 record in five seasons and a trip to the CIF Division 1 semifinals in 2009.”

When asked about the honor Mrs. Duhon said, “It is surreal.  It is such an honor to be included in a list of superstars like the Millers and Bobby Bonds.”

Vanessa Duhon is an important part of the THS staff.  Students appreciate her love, joy and enthusiasm and know that she cares about their knowledge of math but more about them as people.  Her humility, kindness and hard work make her a hall of famer on our campus as well.

One thought on “THS Teacher Inducted into a Sports Hall of Fame … Can You Guess Who?”